Yeah, I’m chillin’ on a dirt road, Laid back swervin’ like I’m George Jones. Rolling down the window, An’ ice cold tea sittin’ in the console. Memory lane up in the headlights, It’s got me reminiscing on them good times. I’m turning off of real life, drivin’ that’s right, I’m hittin’ easy street on mud tires.

I love that song by Jason Aldean…. It’s fun. I particularly like it totally cranked up, windows down.. and flying down the country back roads.

This past weekend I thought I would be staying home helping our youngest get some last-minute homework done. Missing the Farm Chick Show and seeing some of my most favorite girlfriends…. But, as Luck would have it, at the 11th hour, all was caught up, Tom and Matthew were headed to the cabin and I was free to hit the open road.

I had cancelled my trailer reservations for the Sister’s On the Fly camp out at Riverside Park, so I thought I would at least go up Sunday and catch what I could catch. But, turns out I got to help my friend ( and brilliant artist of Latitude Studios) in her booth at the show.. what fun. 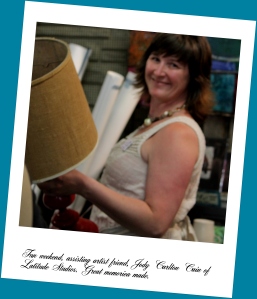 At the show we had two very fast and furious days, but I got to see a lot of Old friends some vendors, some shoppers. Some old high school classmates. I am always amazed at how many people come through that place, and how much “junk” goes out the doors.

After the show closed on Saturday, Jody and I headed back to a cabin that her family owned on Lake Roosevelt, which is about an hour away.. which seems like quit a ways, but the down time was good, and the view the next morning was nothing short of a gift.

It would seem that every cheerful birdie in Washington State choose to be at the cabin Sunday morning as well.. as boy did we have a concert. Leading the talent was this darling little quail. For the first time ever, I found myself wishing that I spoke “quail” just so I could hear what he was so happy about. There were also ground squirrels, rabbits, a coyote or two and some deer, just to make the concert more visual.

We really would have needed all the extras as the view of the lake was breath taking. 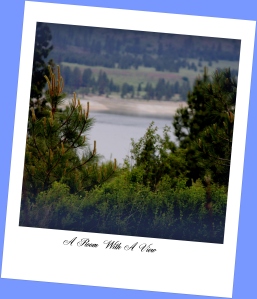 Sunday brought with it a visit with my brother Bill who I haven’t seen it almost 15 years. He has done a lot of living in those years, but looks great and seems happy, in part due to his beautiful wife Pam who seems to have his back, and is a strong support for him.

Keeping to my personal commitment to slow down a little and to re-connect, face to face with friends. I decided to take the long way home and stop by friends Greg and Gwen Nolan in Colfax. I miss those days of living there. Seems I couldn’t have gotten through being a mom of 4 little ones if it wasn’t for friendships of Greg and Gwen and our constant partner in crime Dori Richardson. To this day, our boys call Greg “uncle Greg” and we have been blessed that he has so willingly played that part.

I love the Palouse, it “speaks to me”, there is such a magic about it.

As I came out of the Palouse and was pointing home, the sky ahead was the perfect exclamation point for me. The Perfect ending, to a Perfect weekend.