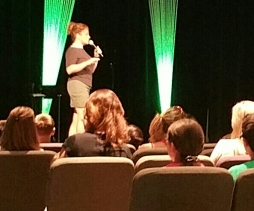 It was a dark and stormy night, on the eve that we met. ... Okay, okay, okay…. perhaps not. But, I have always wanted to write that. I have always loved those writers who seems to “slink” through there stories as if there is something just around the bend.

The truth is, that while it may not be true literally, figuratively it is so true. There I was, at home, minding my own business and out of nowhere….. Well some of that is true.

Facebook had exploded with the news of Harney County -The Hammond’s turning themselves in and the Bundy Boys making a stand….. I had been reading about it leading up to my intro to KrisAnne Hall, I was feeling….. frustrated to say the least. The “cowboys” on one side of the issue and the FEDs on the other. I recall literally throwing my hands up in the air and wondering who was “right” and who was “wrong.”

I know that my instincts were telling me that those “boys” weren’t hurting anything out there at the refuge, though I also found myself wishing that now that they had everyone’s attention, that they would go home and continue the debate from there. I do think, in retrospect, that they knew that truly it wasn’t going to matter. . . The dance had began a long time before Harney County, and sadly it continues a long time after.

I remember not sleeping much after the death of one of the “cowboys”, spending huge amounts of time in prayer as the last of the hold outs were walked out days later. The whole thing seemed unreal to me. A man’s life lost over…. what exactly?  I still struggle with it.

I have family that are in law enforcement. Sons, nephews, cousins. They are all good people, doing what they do as a call to serve others. It is at the heart of them. I am proud of the work that they do, many of them served in the military before and have seen things many of us will never have to, because of their sacrifices.  Yet, here we were. neighbor against neighbor in some no win situation.

In my search for answers I was faced with all the things I didn’t know for sure. What are our rights? What is Liberty? What is land grabbing and is it legal? Why are so many of us sleep walking through this? It was then that my big brother stepped in and sent me to KrisAnne Halls’ website. Finally, someone to walk me through the things I had taken for granted.

In the last few months I have learned a lot, studied a lot, mourned a lot and even chastised myself a lot for sleep walking through the very liberties my sons fought for me to have. This morning I sat among some home-schoolers and was reminded of things I had forgotten. Learned somethings that I don’t think I ever knew before, and was challenged to dig deeper.

Did you know that it isn’t enough to be a free country, but rather to settle for nothing less than Liberty?  Liberty of course being FREEDOM + MORALITY

It is also interesting in that short period of time to walk those in power try and vilify KrisAnne for teaching about Liberty. Today, we learned how the idea of liberty came about, how and why it was so hardly fought for… as we journey back through time. It is true that there is nothing new under the son.

It would seem to me that the very things that our forefathers so diligently tried to provide for us, is being whittled away by a complacent people. I know I certainly was. I couldn’t believe that a government would turn on its people, jail them unlawfully, even lay one in the ground over…….a protest.

I was reminded once again that America is not a Democracy – as a democracy always has slaves and slave owners, but rather we are a republic of “we the people.” Interesting how we let certainly things slink into our vocabulary… then allow it to be come our reality.

If I have learned one thing, it is that we cannot wait for government to “fix itself”, or hope that some “personality” will lead the way.. the truth is Lady Liberty is ours to tend to.. and we have to be fully awake to do it.  Don’t let our story begin with “it was a cold and stormy night.” Ps, this issue isn’t a right or left thing…. it affects us all.  Thanks KrisAnne for sacrificing your life, your reputation and your career to help reeducate me on my role in it.